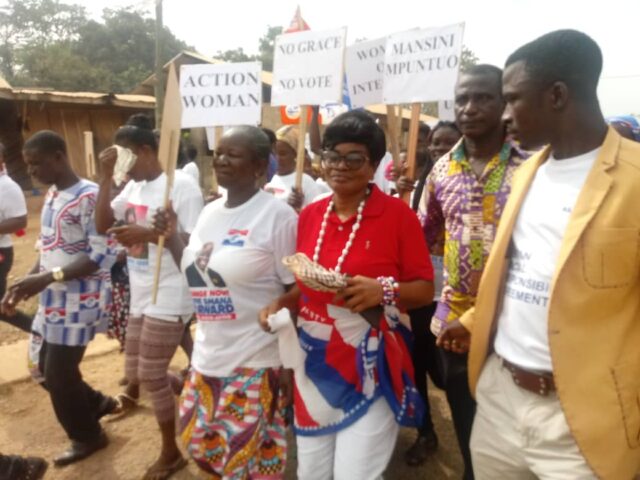 The former Member of parliament for Manso Nkwanta constituency Ms. Grace Addo has called on NPP delegates in the constituency to rally behind her as she stages a possible come back for the Parliamentary seat.

She has observed that delegates of the party have been unfairly treated within the last few years, regardless of their enormous contribution towards the party’s success in the 2016 general elections.

‘’The very people that toiled and labored for the party’s victory in the constituency are not enjoying from their sweat’’ she said.

The former MP who lost the 2015 NPP parliamentary primaries by one vote to the incumbent MP; Mr. Albert Joseph Quarm is livid at the treatment meted out to the hardworking NPP delegates in the constituency.

Ms. Grace Addo said this after filing her nomination form at the constituency office in her bid to recapture the mandate of the delegates in the upcoming NPP parliamentary primaries on 25th April, 2020.

She explained that her return follows the numerous calls from core delegates, supporters and opinion leaders from the constituency. “Where the calls are coming from, there is no way I can turn it down, hence my decision to accept their request and serve with humility” she said.

She is of the firm belief that, the delegates will give her the opportunity to serve again.

She expressed grave concerns on how projects she initiated have been abandoned by the incumbent MP , knowing very well that governance is a continuous process.

One of such projects, she talked about was the abandoned Girls Dormitory for Esase Bontetefu Senior High School in the area.