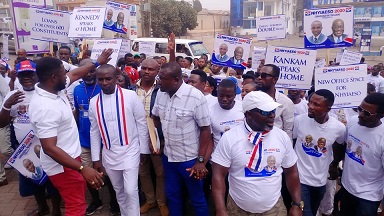 Mr Kennedy Kwasi Kankam, the incumbent Member of Parliament for Nhyiaeso is asking delegates in the elite constituency to renew his mandate for the second time.

According to the humble legislator, an extension of his mandate would enable him serve better as MP.

The first four years given him, he noted was to lay the foundation for a super structure to be built on.

Speaking to the Ghanaian Observer newspaper moments after filing his nomination last Friday, the NPP MP thanked the constituency for the opportunity to serve.

“My brother my people honored me for the opportunity to serve as MP and I plead that they add another term for me to complete some development initiatives and projects I have started in the constituency”, Mr Kankam appealed. 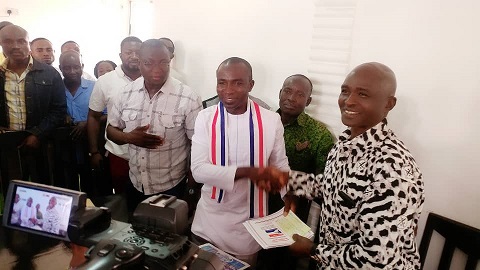 ENTRY:
Marching to the party’s office which incidentally was rented by him recently, Mr Kankam brought traffic to a halt in the famous Santasi roundabout street.

Flooding the street with delegates and sympathisers, the calm mannered legislator made his way on foot to the party office.

Wearing an all white attire with an NPP flag around his neck, Mr Kankam intermittently responded to cheers of KK and Adwuma wura from party supporters including hawkers along the streets.

Beaming with smiles at the party office, Mr Kankam was welcomed by party executives led by the constituency chairman, George Kofi Adjei (Geokad).

ADVICE:
Going through the nomination forms of the MP with the council of elders of Nhyiaeso NPP, Mr Adjei commended the MP for heeding to the regulations of the party.

He noted that by the gesture of returning the forms he picked as an aspirant the MP had fulfilled his part of the contract.

The Council of Elders, Mr GEOKAD intimated will hand over the forms to the Regional executives after the 20th of February for the next processes to begin.

The constituency Chariman on behalf of the elections committee urged the MP to conduct himself well even as they wait for the April 25 election date to select a candidate to represent the NPP in the parliamentary polls in December 7.