I will not witch-hunt Mahama’s ministers- President Akufo-Addo 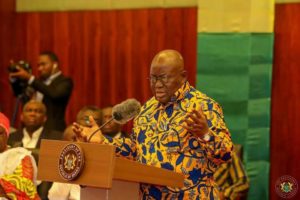 The President, Nana Akufo-Addo has stated that his government does not intend to go after former appointees under the John Mahama led government who were alleged to have misappropriated State funds.

According to him, the task ahead of government was to ensure jobs were created for the unemployed mass and not the concentration of efforts aimed at witch-hunting former officials.

Addressing the media at the flagstaff house in the maiden meet the press series, the president stressed his eagerness to fulfill all the promises he made to Ghanaians prior to his electoral victory in 2016.

He noted the government’s desire to work to ensure the economy of the country is turned around to give jobs and hope to the increasing youth who wallow in the streets for lack of employment.

CRIMINAL LIBEL LAW:
Stating his belief in the rule of law, the president stressed his delight about the repeal of the criminal libel law, an action he was noted to have championed.

According to him, it is never right for speech to be punished and that there should be room for all people to express their views.

The president said people should not be imprisoned or criminalized for what they say or for the views they express publicly.

Stressing with passion, the president noted his delight for the engendering of free speech in the country, adding he has never regretted spearheading the repeal of the criminal libel law from the statute books of the country.

PROGRAMS:
The president stated his commitment to ensuring social intervention programs such as the free senior high school, one village one dam and one district one factory policies were implemented.

According to him, it was important that these policies are carried through so as to hasten the pace of development in the country.

These programs when implemented, he mentioned will open the country to domestic and foreign investments.

The President, stated his commitment to ensuring the flagship program of free Senior High School was started this year so as to bridge the gap between the rich and poor children in the access of education and technology.