A “furious” Mayor of Kumasi, Kojo Bonsu has ordered the lockup of a popular hotel in the Ashanti region after managers failed to ensure participation in the National Sanitation exercise Saturday.

He also closed down a washing bay close by.

Explaining his actions, the Mayor told Luv FM’s Erastus Asare Donkor that he was disappointed to find that the hotel was not participating in the exercise introduced last November to revive a culture of cleanliness after a severe cholera outbreak.

The filthy gutters and pockets of waste in the Asafo premises of the hotel indicated to him that the managers were not committed to the exercise.

“I came here today and I realised that there was nothing going on,so I called up my sanitation inspectors to lock up the place,” he narrated.

The Kumasi Metropolitan Assembly boss laid down the conditions under which he would allow the hotel to operate.

“When the place is clean and I feel satisfied that is when I will open it”, he maintained.

The Mayor said he would be taking the owner of the hotel to court.

Owner of the locked premises, Mr. Opoku Sika told Luv News the sanitation day escaped him. He promised to comply with the Mayor’s order and apologised for his failure to respect the exercise.

Government is planning to introduce a National Sanitation law which will be participation in the monthly exercise mandatory. 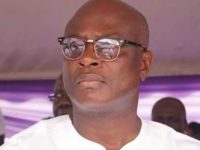