Authorities at the Edwenase M/A Primary school have decried the poor state of the school’s infrastructure.

Pupils of the school continue to study under trees despite government’s quest to eliminate schools under trees.

Assistant Headteacher of the school, Mensah Shadrack tells rawgist.com the deteriorated state of the school’s kindergarten and Primary 1 block compelled the Municipal Assembly to demolish the structure to avoid future disasters.

“The assembly as a result started the construction of a 4-unit classroom block to accommodate the pupils but work was halted since January 2013. Weeds have taken over the halted project”, he says.

Due to the bushy nature of the environment, pupils and teachers are often chased away by snakes.

Classes have to come to an end with the slightest threat to rain.

Another worrying issue according to some of the teachers is that, classes are conducted close to a toilet facility; a situation they say is not conducive for studies.

The Assistant Headteacher pleaded with the district assembly to assist the school complete the classroom block project to enhance teaching and learning.

Responding to why the 4-unit classroom project has halted, the MCE for Ejisu-Juaben, Afrifa Yamoah Ponkoh said “it will be completed as soon as funds are ready, adding that the project is being undertaken under the District Development Fund (DDF), and for close to two years now, the assembly is yet to receive its DDF from the government.

He refuted claims that the project has been abandoned, stressing that the President, John Dramani Mahama has issued a directive to all Metropolitan, Municipal, and District Assemblies that, no project started under the NDC regime should be left uncompleted.
He says until the district assembly receives funds to complete the project, the pupils will continue to study under the current conditions. 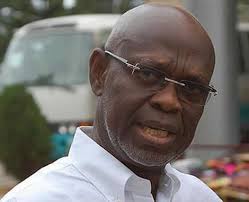 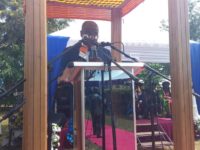