Former Deputy Ashanti regional minister; Joseph Yammin has asked the NDC to stop dividing its own front especially in constituencies where the party is trying to take an NPP seat or maintain a seat that could easily be lost to the NPP.

Joseph Yammin was speaking at a capacity building workshop for NDC youth organizers held at Adansi Asokwa in the Adansi North District.

He urged all NDC urged all members of the NDC in the area to vote massively for Lawyer Evans Amankwah who has helped the party closed the gaping gap with the NPP in previous elections as the NDC’s candidate. He believes some big men in the party are sponsoring people to contest certain seats without recourse to the NDC’s one million votes target and alleges that those people are not interested in the success of the party but their selfish interests. Joseph Yammin who spoke passionately touched on the sacrifices the young lawyer had made for the party in the area that has gotten him close to the seat and contends that bringing a new face to contend with him sends bad signals to the electorates and may cost the NDC the seat. 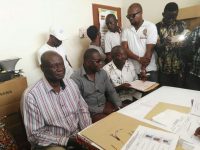