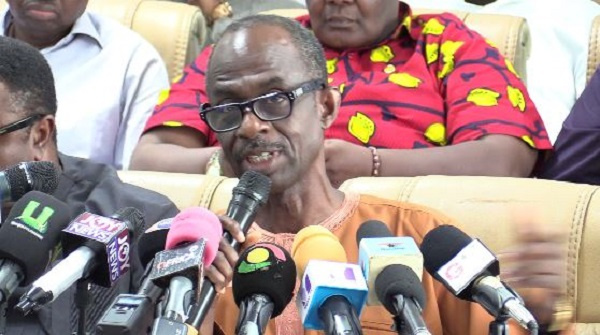 The National Democratic Congress (NDC) is accusing the electoral Commission of doing the bid of the ruling New Patriotic Party (NPP) government with regards to the ongoing limited registration exercise.

Speaking at a press conference Thursday June 27, General Secretary for the party, Johnson Asiedu Nketia noted how research from their deployed personnel at the various centers nationwide indicate several attempts by the NPP through the EC to disenfranchise several eligible voters in the ongoing limited registration exercise.

Inadequate number of registration centers and shortage of registration materials including printed forms, number of BVR equipment and personnel, were highlighted by Mr. Nketia as some of the tactics being deployed to achieve their mischievous agenda.

“The NDC stands vindicated today due to the widespread failure of the VMS equipment in the majority of the district centers due to reasons such as poor internet connectivity, power outages and poorly or improperly trained personnel to operate the equipment. This has led to the abandonment of the online registration process in several districts throughout the country….”

“….The effort of the commission to limit the number of qualified Ghanaian voters eligible to register has been exposed as fruitless by the number of Ghanaian youth who inundate the registration centres daily to wait for several hours unend; an avoidable hardship deliberately imposed by the electoral commission on innocent youth, whose only crime is daring to exercise their civic right.

“Illegal and clandestine” is how he described attempts by the Electoral Commission to register several persons in various areas who are not qualified.

He noted for example, how some EC officials were caught registering over 100 minors in the MCEs office at Birim Central Municipal area.

In another instance he said, “new registration centers were created and equipped with BVR equipment with registration proceeding frantically in the presence of NPP officials but without notice to NDC at all”.

Some persons, particularly illiterates, were also reported to have had wrong details captured by EC personnel, resulting in the wrongful assignment of polling stations to registered voters to places far from their villages of residence and subsequently inconvenience in finding polling stations close to them to cast their vote.

With regards to intimidation and harassment, Mr. Nketia noted that some ‘potential registrants in the NDC strongholds were harassed by NPP vigilantes operating under the guise of state security agencies with the objective of disrupting the exercise, leading to the suppression of the voter numbers in these areas.

Mr. Nketia was displeased and disappointed about the Electoral Commission’s posturing; promoting the agenda of the NPP to give them an upper hand in the next elections.

“Our observation of the registration exercise so far seems to point to a calculated and well-rehearsed orchestration designed by the Electoral Commission to intentionally create a state of confusion that will allow capable, privileged and well positioned political players to exploit in pursuit of their parochial partisan interest rather than national interest of securing a credible register which is a prerequisite for free and fair elections”.

Meanwhile, the exercise which began on June 7 will end on Sunday, July 7, 2019, across all district offices in the country.