Ghana News–The flamboyant Chairman for the Ashanti Regional Branch of the New Patriotic Party (NPP), Bernard Antwi-Boasiako is likely to get his mandate renewed as he goes unchallenged in next week’s regional executive elections.

The incumbent will have a walk through the park as Robert Asare-Bediako his main challenger, last Wednesday announced his withdrawal from the regional chairmanship contest.

‘Wontumi’, as the incumbent Chairman is referred to by party faithful won a decisive mandate to lead the NPP in Ashanti exactly four years ago in 2014.

Having led the party to electoral victory in 2016, the incumbent chairman would without any unforeseen circumstance get his mandate renewed for a second term in office.

In the regional women’s organizer elections, one Aunty Bea is lacing up her boots to challenge the incumbent, Nana Ama Ampomah who is tipped to win with a wide margin.

Francis Adomako, a university lecturer who is contesting for the regional organizer position is tipped by many to win the seat to lead the region despite some labored attempts from Daniel Agyenim Boateng and Oscar Riches.

Nelson Owusu Ansah is likely to win the youth organizer position even though Dennis Kwakwa, a former tutor and Raphael Sarfo are seen as threats.

Mr Sam Cudjoe, a veteran Politician and tutor at the Kumasi High School is gunning to win the ticket to become the second Vice-Chairman.

In the Regional Secretary contest, Mr Sam Pyne, the calm looking incumbent is tipped to sweep aside one Atta Sarpong to retain his seat.

Agya Sei, a popular contractor is billed to win the race for the 1st Vice-Chairman position as one Kwabena Senkyire tries a come back to the regional executive office.

At the time of going to press, streets in the Ashanti regional capital of Kumasi had been painted with the portraits of the contesting candidates.

Many had flaunted their miniature portraits on electricity poles and every available space they could locate on the streets of the metropolis.

Despite the elections taking place at Ejura, a community outside the Kumasi Metropolis, the aspirants however are pitching camps in Kumasi to carry out last minute lobbying.

Speaking to this reporter some delegates in the Asokwa Constituency expressed optimism of a smooth contest at Ejura but noted the withdrawal of their former chairman from the regional chairmanship contest has taken some shine out of the polls.

My arrest was a ploy by Mahama-Wontumi

The true “enemies” within the New Patriotic Party 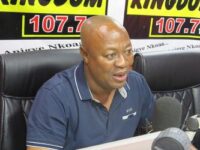