The former Minister of Trade and Industry, Mr Alan Kyeremateng has assured artisans at the Suame Magazine enclave that a future New Patriotic Party, (NPP) government led by Nana Addo will make the site an industrial hub.

According to him, the site had come of age to be supported to carry out more research and inventions.

Addressing a mammoth rally at the precincts of the Suame Magazine Industrial  Development Organization,(SMIDO) during a tour by the party’s flag-bearerer in the Ashanti Region, the affable former minister indicated the resolve of the NPP to resource the organization to churn out better results.

He noted the NPP had factored the cost of expanding such group and individual ventures so as to open up employment and job opportunities across the country.

Mr Kyeremateng noted the importance of such initiatives and promised to empower both the artisanal branch and the National Vocational Training Institute, (NVTI) to make apprentices and products useful to the job market after enrolling.

HARDSHIPS:
Responding to the chants from the cheering  crowd, Mr Kyeremateng assured Suame residents of a bright future.

He stressed the policies the NPP flag-bearer had put in place were encouraging to offer job opportunities for the youth and the unemployed.

This, he noted when achieved would ensure money stayed in the pockets of people and increase the life expectancy rate in the country.

He disclosed poverty had become so rampant that people were giving up in life with some dying as a result of it.

HOPE:
Mr Kyeremateng told the teeming crowd that the best bet for economic transformation lied in the good policies of Nana Addo, the NPP flag-bearer.

He, therefore, charged them to vote massively for the flag-bearer in the upcoming presidential election so as to facilitate the realisation of the party’s good policies.

Mr Kyeremateng, passionately urged party officers as well as the public to be vigilant during the upcoming polls, adding elections were won and lost at the polling station.

He advised the public to take part in the upcoming voter exhibition exercise by the Electoral Commission so as to ensure their names were in the voter roll to allow them vote later this year. 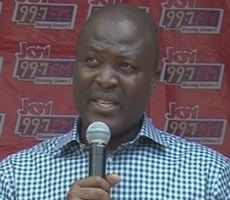