Professor Kwasi Obiri-Danso has been appointed as the Vice-Chancellor of the Kwame Nkrumah University of Science and Technology (KNUST) for the next four years.

This was contained in a statement by KNUST on Thursday, May 19 and signed by the Acting Registrar of the University.

Professor Kwasi Obiri-Danso, before his appointment was the Provost of the College of Science at the KNUST.

He replaces Prof. William Otoo Ellis who was appointed Vice Chancellor on 1st October, 2010 and is largely considered to have made significant progress in the achievement of this vision especially in the areas of Science and Technology Research, Graduate Training, Information and Communication Technology (ICT), Quality Assurance, Capacity Building and Collaborations among other areas. 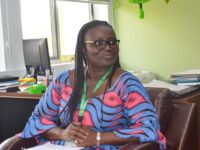