He died at a hospital in London last night.

Sources close to the former NPP chairman confirmed the sad news to rawgist.com.

False stories of Jake’s death hit social media in December last year but was quickly put out by his party and close Associates.

Mr Obetsebi-Lamptey served as Chief of Staff in the Kufuor administration and later as Minister of Tourism. He is credited with the rebranding of Valentine’s Day as Chocolate Day in Ghana. He is also credited for the introduction of Friday wears in Ghana, as part of measures to promote made-in-Ghana goods. His father was one of the Big Six in Ghana’s political history.
He will forever be remembered as one of the political giants Ghana has ever had. 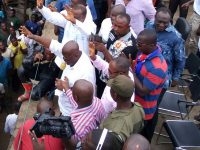