Former Deputy Ashanti regional minister, Joseph Yammin has advised the NPP not to waste their resources on election 2016.

“It will be an exercise in futility”, he said in an interview on Kumasi based BOSS FM.

When asked if he will contend the parliamentary seat at Kwadaso, Joseph Yammin answered in the negative. 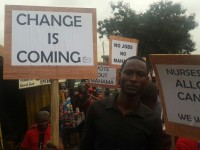