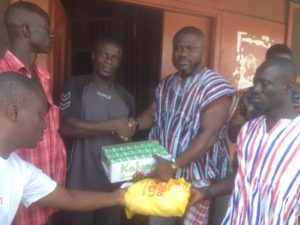 The Member of Parliament for the Asante Akim-North constituency, Hon Kwadwo Baah Agyemang has once again taken his unique style of campaign to taxi drivers  and traders across the Agogo community, urging them to embrace the upcoming change for themselves and their families.

Addressing them at the various taxi ranks and routes across the Agogo town as he presented the unions with cartons of Kalyppo fruit juice, Hon Agyemang noted the lives of taxi drivers stood the chance to become better since the New Patriotic Party (NPP) had plans to support entrepreneurs and self-employed individuals with incentives to lessen the burden on their shoulders.

According to him, the party plans to create an enabling environment for all businesses to thrive in the country, noting taxi drivers will not be an exception in this drive by the party.

The NPP, the legislator intimated will not seek to burden taxi drivers with hefty road worthy fees and tolls, insisting the party rather will collaborate with driver unions to streamline their activities.

MARKET TOUR:
Addressing market women later at various market centers across the community, Hon Agyemang pleaded with the traders to vote massively for the NPP at the upcoming polls on December 7.

He urged them to leave their items on voting day and ensure they cast their ballots early in the morning so as to avoid the late hour rush.

Many, he disclosed missed the opportunity to vote last four years since they decided to go on their chores before entering the voting arena.

Hon Agyemang also entreated the traders to talk nicely to customers who visit their sheds, adding this has the potential of winning undecided voters to the NPP’s fold.

INTERVIEW:
In an interview with the Ghanaian Observer Newspaper after the tour, Hon Agyemang said the upcoming general election will be a defining moment for the country and the populace.

According to him, the election provides the people two clear choices, either to stick to the status quo as the people wallow in misery or move on to a better future by embracing the NPP’s agenda for change.

‘’My brother, we as a people will be faced with two options as December 7 approaches and these will be for us to either choose to stay in poverty or vote for change for a brighter future’’, the MP stated with passion.

He noted, ‘since Ghanaians have proven to be discerning they will give a clear verdict on December 7 and endorse the NPP to form the next government’’.