The much anticipated spiritual battle between controversial leader of the International Gods Way Church and a fetish priest claiming to be the source of his spiritual powers could not happen.

Bishop Obinim flew from Accra to the Jubilee park in Kumasi with a coffin for the spiritual battle. The Prophet waited together with a huge crowd for the fetish priest to turn up for the battle but nothing was heard of the witch-doctor.

Bishop Obinim who waited at the Jackson park for some two hours with all his pastors had vowed to “strike down” the fetish priest. The fetish priest has been very vocal in the media claiming ownership of Obinim’s spiritual powers. He wanted to strip Obinim off his powers as punishment for the Prophet’s failure to show gratitude.

The much touted cause a lot of traffic in town with a lot of people leaving their jobs to witness this event. The event however could not happen as the witch-doctor failed to turn up. The rains also played a part in dispersing the crowd.

The angry crowd vowed to deal with the witch-doctor whenever he turns up on radio to badmouth Bishop Obinim. 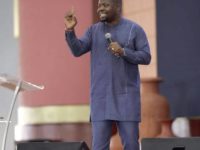 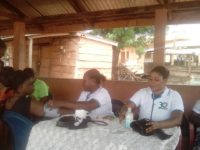