Kikikikikikiki, I trust that you’ve noticed what happens anytime I begin a write-up with “Kikikikikiki”. Today, I’m going to blast at full throttle. This is what I call hundred percent zoblazo. But before then please permit me to recycle a joke I used sometime ago. I think it’s apt for today’s article.

In these modern times one could be appalled that some people are still insanely superstitious and attribute any ill-luck or misfortune to the doing of witches; and Nana Agyekum, a rich cocoa farmer who lived many years ago at a village in the Brong Ahafo Region was the veriest gullible of all such like-minded people.

VW Beetle car is one of the few vehicles with the engine at the rear. It happened one day that, Nana Agyekum after a very successful cocoa season bought a VW Beetle car. In those days very few people in the whole country were privileged to own cars, and so he decided to visit some friends in a neighbouring town to show off his newly acquired asset, but the car developed a fault halfway through the journey.

He quickly went in front of the car and opened the bonnet in an attempt to check the fault; unfortunately no engine was found. He thought that some witches have removed the engine in a blink of an eye! Sweat began to run in rivulets down the sides of his face; his jaw dropped involuntarily, and he spoke in brong: “Kai, nkrofuo no b3 tu engine no.” (Witches have removed the engine.)

Nana Agyekum waived furiously for the sporadic oncoming vehicles to stop, and because he was quite popular in the area, a couple of drivers with their passengers alighted from their vehicles and went to his aid; after narrating his story some enlightened ones among the people, with suppressed laughter tried to convince the old man that engines of VW beetle cars are positioned at the rear, but he wouldn’t listen, so they took Nana to the back of the car and opened the engine compartment.

On seeing the engine, he exclaimed, “Aah, you see, I knew it! These people are wicked and fiendish, after removing the engine from the front see where they’ve brought it.”

Folks, something serious has happened this week. Kai, nkrofuo no b3 tu Opana engine. In a press conference dubbed, The True State of the NPP by Save NPP Now, a group which comprise loyalists, supporters, Polling Station Executives, Constituency Executives, Regional Executives, National Executives and grass root members of the New Patriotic Party (NPP) both in Ghana and abroad made staggering revelations about the rot in the largest opposition party in Ghana.

The group led by Baah Acheamfour stated that the flag bearer of the NPP, Nana Akufo-Addo who has been accusing the Mahama government of corruption, willfully and without hesitation endorsed the diversion of party funds amounting to over five million Ghana Cedis into a secret Ecobank account.

The group created a gloomy picture of some of the happenings in their party to the effect that it is more expensive to maintain the extravagant lifestyle of their flag bearer than maintaining the party’s machinery at the grassroots. “The flag bearer has successfully created a situation where his personal needs and expenses take priority over the operational needs of the party,” said Mr. Acheamfour.

“Quite recently, there was a fundraising activity undertaken at the Kumasi Sports Stadium in the Ashanti Region. It will interest Ghanaians to know that in effect, all the funds that have accrued to the party, running into tens of millions of Ghana Cedis, and how they have been used has been shrouded in mystery and secrecy. Any attempt by any member of the party to ask legitimate accountability questions is always met with insults, threats and intimidations. How can Nana Akufo-Addo expect Ghanaians to take him serious when he is so opposed to any form of accountability as far as the utilization of NPP party funds are concerned?” He continued. Abakade, oyiwa!

The group also lamented about intimidations, harassments, threats and fatal attacks of the flag bearer’s armed private paramilitary group called the Invincible Forces who operate from his residence at Nima. According to Baah Acheamfour, the leader of the group, he was brutally assaulted in the studios of a Kumasi-based radio station, Fox Fm on 25th April, 2016 at 3:30pm simply because he spoke about issues bothering on accountability.

In another development, the chairman of the Church of Pentecost, Apostle Dr. Opoku Onyinah, has described President John Dramani Mahama as a tolerant and democratic leader, who will ensure free and fair elections in Ghana.

Friends, we have two testimonies before you; that of Baah Acheamfour and Apostle Dr. Opoku Onyinah. In a few months, we will have the opportunity to choose who will lead this country for the next four years. The clock is ticking, and the decision is yours.

Kikikikikiki, do you also want to know the true state of the NPP? A bird near me just whistled, “Kukrudu, wetin dey there? Eshi Radoradozo. 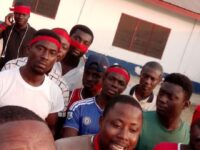 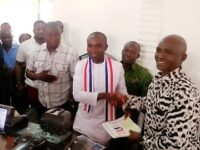