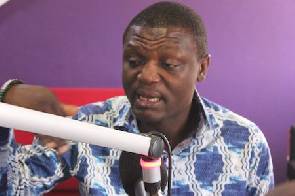 The opposition National Democratic Congress(NDC) has described as a witch-hunt the tussle between the Ghana Revenue Authority(GRA) and the brother of former President, Ibrahim Mahama over outstanding import tariffs.

The Economic and Organised Crime Office (EOCO) has ordered Mr Ibrahim Mahama, to pay GH¢12.7m to the state by May 8, 2017.

The amount represents duty for construction equipment he cleared at the Tema Port and issued about 44 cheques which were not honoured.

He was picked up by the anti-corruption agency last week Tuesday in relation to an ongoing investigation over the cheques.

Mr Mahama, owner of the construction company, Engineers & Planners, met EOCO on Friday for the third time in the week.

Commenting on the fall out from the matter, the National Organizer of the largest opposition, Kofi Adams contends that the moves being made by the GRA and the supposed involvement of the Economic and organized Crime Office(EOCO) in the matter amounts to a with-hunt by the governing NPP.

“Clearly so this is an act to witch-hunt business persons and former officials of the previous administration, when they have engaged with the relevant institutions of state who are very much aware and are presently informed of the arrangements they have in place to fulfill whatever obligation they have to the state. It is quite clear that the institutions involved here-the GRA and the companies that belongs to Ibrahim Mahama have not reported any matter to EOCO. Indeed according to GRA, they are dealing with whatever challenges they have faced in the way they have always dealt with other issues that have confronted them. And they have not invited EOCO to this matter. And they say they are very well in place and in position to deal with the matter as set out in their mandate and nobody understands the role of EOCO in this matter,” he told Accra-based Citi FM.