The Leader and Founder of the Progressive People’s Party (PPP), Dr. Paa Kwesi Nduom, has said Ghanaians should blame themselves for the current economic hardships facing the country.

He said instead of voting for quality leadership, Ghanaians had, from 1992 to 2012, voted in exchange for wax prints, wash basins, cups of rice, cooking oil, Ghc10 cash, sewing machines, alcoholic beverages, among others.

Speaking at the second anniversary of the party “to take stock” of what had gone wrong in the 2012 general election, Dr. Nduom said it was about time Ghanaians did self-introspection to see who among the political party leaders was competent enough to run the country.

You get what you vote for

“You get what you vote for; you cannot vote for paper and expect to get gold! Never!” he said.

“This should be a big lesson for you all,” he said, adding, “It is about time we told Ghanaians the truth — that what they planted in 2012 is what they are reaping. I am not insulting Ghanaians, but that is the truth.

“Ghanaians must learn the bitter lesson today; next time they have the opportunity to vote, they will not go for cloths, wash basins, rice, cooking oil, Ghc10 cash, sewing machines, alcoholic beverages and drink to vote,” he said.

He said voting for somebody to become President, member of Parliament or district chief executive would not give such a leader automatic or refined skills to ensure that the country was ruled effectively.

Before a person comes forward as the proposed candidate of a political party, he or she must have the needed qualities to ensure that the nation moves forward, alleviates poverty, creates jobs and ensures peace and stability,” he said.

Dr. Nduom said after voting in exchange for immediate needs, the Ghanaian voter had realised that there was no regular supply of water, electricity, lack of jobs, poor road networks and corruption and so they had no excuse, but to live with it and vote wisely the next time.

The PPP Leader urged Ghanaians not to take his admonition as an insult but rather as the hard truth which must be told while they worked towards 2016.

“Promising and entering into government is not a difficult task. However, management of the economy requires the needed competence, which the PPP has in abundance,” Dr. Nduom said.

He said with the prevailing economic situation in the country, Ghanaians should start asking the question: “Who is in charge of the country?”

He said the PPP had assembled such a great team that if Ghanaians had handed power to it in 2012, the country would have seen tremendous improvement in economic growth.

He said the mistake of voting for immediate personal gain in the 2012 General Election which had plunged the country into the current economic problems should serve as a lesson to guide Ghanaians in future elections.

“What you must know as a voter is that when a politician gives you sewing machines, Ghc10, rice, drinks and other stuff just to win an election, it means the said politician is done with you the voter,” he said.

On winning the elections, he said, the political office holder would swim in affluence, while the voter returned to hardships.

“I will also not blame you in a way because when the elections are over, winners emerge and you will not see them again until the next election. Therefore, you as the voter also want to take from them first,” he observed.

Mike Eghan Jnr said the PPP was the only political party in Ghana which used seven months to campaign and still did better than older parties.

He said if after campaigning for seven months the PPP placed third in the general election, then 2016 would be another story and urged all executive members from the constituency, regional and national levels to roll up their sleeves and start working immediately for victory in-2016. 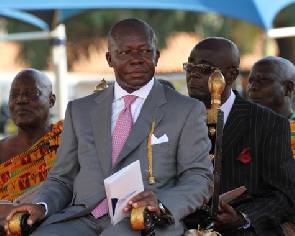 Ghana on a “corruption carousel” – Asantehene