The Omanhene of the Tepa Traditional Council, Nana Adusei Atwenewa Ampem has, in an unusual but remarkable manner, heaped praises on the Mahama administration for developing his area including the refurbishing of his private palace.

Speaking at a closed door function to welcome the visiting Deputy Education Minister, Mr Alex Kyeremeh who was on tour of some centers where students were sitting for the West African Senior School Certificate Examination,(WASSCE) in Ashanti, Nana verbally noted his delight to have been accorded such support.

BOLD STATEMENTS:
According to him, though Chiefs were supposed to be non-partisan, nothing could however stop them from showing gratitude to successive or current government for supporting them with development projects.

He stressed that though governments were elected to provide projects and infrastructure aimed at the developing the country, some excelled much more than others and therefore the need to commend those who do well.

COMMENDATION FOR OKUDZETO ABLAKWA:
Nana disclosed that his ultra-modern private offices and conference room within the palace was done by the exclusive generosity of this government.
He mentioned that bills to the palace’s renovation and upgrade was borne by the Deputy Minister of Education in-charge of Tertiary, Samuel Okudzeto Ablakwa, who the Paramount Chief enthusiastically disclosed has been nicknamed ”mmerante3hene of Tepa” by the youth and residents.
Nana Atwenewa Ampem also commended government for undertaking massive infrastructure projects in the Tepa Community.
According to him, schools that were in the Tepa Community have had their fair share of development projects including the provision of boarding house facilities and furniture.

He disclosed the buses these two schools were using for outdoor educational engagements as well as sports festivals were not in good shape and therefore humbly requested for two brand new ones for them.

MINISTER:
Addressing media men later during the tour, Mr Alex Kyeremeh expressed delight at the turnout of students for the exams in the Ashanti region.
A total of 62,125 students comprising of 31,287 boys and 30,838 girls sat for the WASSCE exams in Ashanti and these numbers represented 177 schools in the Region with the Sekyere- Afram Plains the only district that had no representation due to the non-availability of a Senior High School in the locality.
He, however , admonished parents including the traditional authorities to continually show concern in the education of their wards and children since the rate at which some female students were getting pregnant before they finished school was becoming a source of worry.

EDUCATION DIRECTOR:
Mrs Mary Owusu Achiaw, Ashanti Regional Education Director implored mothers of pregnant SHS Students not to deny them of further education when they put to bed since they could go on to become better ladies in future.

According to her, Barbara Serwah Asamoah, the current Deputy Minister for Lands and Natural Resources gave birth while she was in school but had risen to become a lawyer and an influential personality in the society. 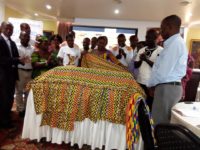