After releasing the judicial corruption scandal which has become a topical issue in the country for some time now, ace investigative journalist, Anas Aremeyaw Anas has hinted of a possible investigation into the activities of the passport office, WAEC and GFA.  He has however downplayed reports on an investigative work he has done in relation to parliament. He says he would release any report whenever it is ready.

He made this statement on Tuesday at the CCB auditorium, KNUST at a programme organized by the Students Representative Council (SRC) dubbed ‘Tektalk” where he was invited to inspire the students.

Addressing the students, Anas admonished the students to make a mark in the society by making an indelible mark. He encouraged them to be patriotic and urged them to contribute their quota to the development of the country by fighting corruption at all levels.

Reacting to questions posed by students on the activities of the passport office, WAEC and GFA, he assured them to keep their fingers crossed. He added that he believes people will love the report he will come up with.

Also, reacting to issues of privacy during his investigation, he stated that public interest has been the overriding principle. He further explained that since he makes impact through his investigative works, he believes it is right to break people’s right in such circumstances.

He urged the students to do what he has been doing (investigative works). He says it is not exclusive to him alone and that everyone can also take cue from him. As part of his effort to encourage most people to learn investigative journalism, Anas announced that, he is organizing a 3 day workshop in Accra on 29th April, 2016 to train people on the use of hidden camera. He says interested persons should visit his facebook page for details. 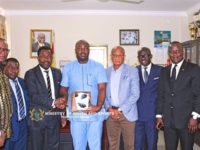