It is clear that the largest opposition party , the New patriotic party have no policies for the good people of Ghana.

The series of attacks and unconstructive criticisms from the NPP shows they are not ready to take over the leadership mantle from this current administration. The NPP has become a party filled with entertainers ; relating to the recent “True of the nation address” by the opposition flagbearer Nana Addo and the manipulation of figures by his running mate, Dr. Bawumia.

What the the flagbearer and his running mate are doing is just clear desperation for power. Politics is a contest of ideas but not a contest of lies and manipulation of figures to get shortcut to the flagstaff house.

The good works of President Mahama is what the good people of Ghana is going to base on and give him another term.

The phenomenon investment in infrastructure is just unprecedented and the launching of the 40 year development plan is what developing countries like Ghana needs to develop. 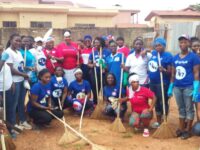