Residents of Akweteyman, a suburb of Accra were thrown into a state of shock Friday evening when a 25-year-old man allegedly stabbed himself.

The man whose name was given as David Agyei, according to an eye witnesses, claims his wife is very problematic and so in order to avoid his nagging wife, he decided to end his life by stabbing himself.

An eyewitness who spoke to Adom News’ Abednego Asante Asiedu said the man lived together with his wife and their two-weeks-old baby in a compound house.

He said, “David always complains that his wife has been disgracing him before his friends and he finds that as very insulting and that is why he wants to take his life to end everything.

“We heard the landlady shouting on top of her voice and so we rushed to the house that evening and saw him with a knife ready to stab himself, but he threatened to stab us if we get closer to him, so we left him and before we realized, he had stabbed himself”.

Thanks, My Marriage Is Safe – Actress Kafui Danku 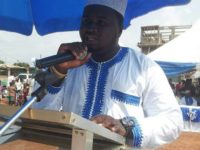 Suicide: A national canker which needs to be addressed