One day when I become the EC, I would not do certain things. I would RECOMMEND all Aspirants to run in the SRC Elections. The reason is that, that provision in the constitution which talks about NOT RECOMMENDED is not helping us. It is a good provision but has bad implications. What if it is modified as NOT RECOMMENDED BUT CAN RUN? This would enable us know who our next crop of leadership would be.

When I heard that Amoako Ahenkora has filed the suit, I was not surprised. I had predicted a court suit in this year’s election simply because, aspirants would definitely file one after the vetting. I see some sort of maturity in the JC in this matter.

The JC or the panel perhaps do not want us to vote after 21st March, 2016. The reason why they quickly ruled that the EC has breached the constitution so all aspirants should be vetted. I would attempt to say something about the ruling but would be careful not to be charged with contempt. The JC himself and others know I can disagree with the ruling.

What constitutional provision did the EC breach? Was this ruling cooked so that all aspirants would be legible to run? In the event that the EC conduct another vetting, would there be NOT RECOMMENDED? What if the EC decides not to go by the court ruling and proceeds to continue from where he left off? The court ruling is not clear in my ears. The EC should start the process all over again. So would the aspirants buy nomination form again, including all those who were RECOMMENDED? The punishment is too big and I think this ruling would not serve the interest of the RECOMMENDED Aspirants.

Justice is served but not in the interest of all. This ruling is such that it has brought extra cost and it would consume our time. The vetting which would be reorganized is likely to be a mere formality. It will not serve any purpose, my candid opinion though. Mr. EC, what would happen if you do not conduct any vetting but allow the ‘boys’ to join the ‘men?’ The best solution, moving forward is amendment of that provision in the constitution. For instance, if the clause becomes NOT RECOMMENDED BUT CAN RUN, the electorate would be in a position to know what to do. It will save cost and injunctions which seem to thwart the process.

The advent of the NOT RECOMMENDED Aspirants is not bad at all especially candidates which some of us feel that they did well but for one reason or the other, the panel thought otherwise. Who becomes the SRC President should be decided by students of KNUST and not five or seven member panel who are most of the time not students. We the students matter and we know who is competent and who is not. The panel should not decide for us but can suggest to us.

I read that mature write up from Bell Ampem Mensah. However, I had hitherto seen a write up by NAYASA, that she would be back. How did she get to know the outcome of the ruling before the court sitting? I do not see this as a mere prediction. What if some of the NOT RECOMMENDED Aspirants decide not to contest again? Well, that would be their business anyway.

I see the outcome of the ruling as though all should be allowed to run. The real matter was not tackled. How DNA would have felt if his case had been ruled this way. Welcome back to the race, NOT RECOMMENDED Aspirants but we know what some of you are capable of. Some of you can really help us, however, some of you are in the race just to disturb us.

Mr. JC, kudos for the yeoman’s job, I would not forget the counsels in this famous or infamous case. Amoako Ahenkora, well done. I’m inviting you to dine with me. Of course, it is fufu but the ‘energy drink’ which is an accompaniment is optional for you. The JC and the counsels are not left out. They are cordially invited as a matter of great importance.

My name is KING MIDAS AMOATENG, Third Year AKAN Student. The heat is still on in this year’s elections. Raheem is my good friend who lives in Republic Hall Room 185, Immoral Lane. My brother, good morning and enjoy your day to the fullest.

ELECTION WATCH continues until elections are over. The heat is on……. 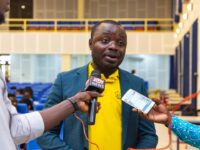