The Volta regional version of the New Patriotic Party (NPP)’s Special Electoral College was highly successful except for a misunderstanding which ensued between the regional chairman, Mr. John Peter Amewu and Mr. Ken Anku, a former parliamentary candidate for North Dayi.

The two personalities verbally assaulted each other in public at the Catholic Secretariat Hall a few minutes into the voting exercise.

The misunderstanding could have marred the voting process if some delegates had not intervened.

It all began when some media personnel approached Mr. Amewu to capture him while he voted. Agreeing to the request, Mr. Amewu moved toward the polling booth for that purpose.

However Mr. Anku who did not understand why he moved towards the booth confronted him angrily and that resulted in exchange of words.

In the course of the confrontation, Mr. Anku called the regional boss a traitor and in turn he fired back with ‘you are stupid’.

The encounter then degenerated into one insult after the other until some delegates intervened to calm the two men.

Voting which started around 9:17am, resumed immediately and continued peacefully. By midday delegates had cast their votes.

In all 51 delegates cast their votes with Nana Akufo-Addo garnering the most votes per the official results announced by the Deputy Director of the Electoral Commission, Anthony Oppong. 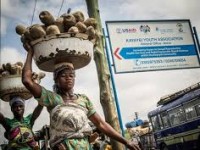 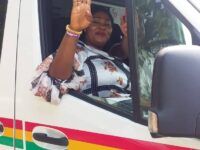