The agreement outlines a model to provide funding for potential borrowing entities under private health facilities, such as hospitals and clinics, accredited by the National Health Insurance Authority (NHIA) or those seeking NHIA accreditation.

Before partnering with the bank, USAID used similar models in other African states to support sectors with high prospects for growth, a statement issued by the Global Media Alliance, and copied to the Ghana News Agency, said over the weekend.

Since 1999, USAID has been designing and delivering alternatives to unlock financing for entrepreneurs in the developing world.

The statement said the partnership with Fidelity Bank would improve accessibility to credit facilities for promotion of growth in the health sector, which FBGL has shown commitment to supporting in past times.

“USAID’s Strengthening Health Outcomes through the Private Sector (SHOPS) program will provide direct support to both Fidelity Bank and borrowers under the proposed facility,” the statement said.

It said the agreement would help unlock new products that would facilitate health care financing in the country and address the high cost of health care, which remains a major barrier to access, especially for the poor who spend a greater share of their household income to meet their health care needs.

This initiative is also expected to strengthen the Bank’s Corporate Social Responsibility position whilst building specialization and brand knowledge in the health sector, it added.

“Fidelity and USAID are showing the rest of the industry that there is more to gain from cooperating towards a common goal,” it said. “Both companies are working together closely”.

The statement quoted the Deputy Managing Director of Fidelity Bank, Mr Jim Baiden, as saying: “Such initiatives create strength in numbers, since the pairing creates a stronger unit.”

For his part, the Mission Director of USAID-Ghana, James Bever, lauded Fidelity Bank’s initiative saying, “I am proud to sign this agreement with Fidelity Bank, partnering with financial institutions that are eager not only to make profits but to help improve the country’s health care system.”

“Fidelity Bank has demonstrated its commitment to growing SMEs and reaching the unbanked population through the acquisition of ProCredit and the establishment of a financial inclusion department.” 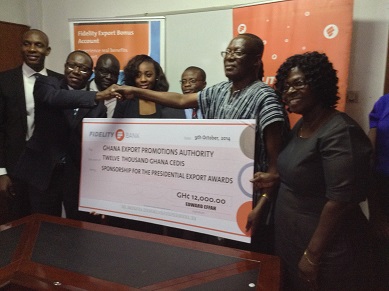