The Electoral Commission of Ghana, (EC) has cautioned media practitioners, especially  radio and TV stations to desist from declaring the winners of both presidential and parliamentary elections since they were not mandated to do so.

According to the Commission, the media could only call or announce the results as well as carry out projections of the figures of contestants in a particular election but could not in any way announce who they think had won the polls.

Addressing the media in Kumasi during a training workshop in the lead up to the much anticipated limited registration exercise which has been slated for the 28th of this month to the 8th of May, Mr Serebuor Quaicoe, the new Ashanti Regional Director of the Electoral Commission intimated his outfit was the only legally and constitutionally mandated body to declare elections in the country.

He stressed the media could only announce election results, but  added they should endeavor to put on record that what they were pronouncing was only provisional results.

This, he noted was because the Electoral Commission possessed the unfettered mandate to certify any results the media may have at their disposal during or in the course of the election or counting periods.

He rallied the media to consciously study the operations of the Commission so as to acquire the requisite knowledge to inform their listeners and readers.

According to him, a well informed media was the answer to cutting off misinformation, inaccurate reportage and sensationalism.

Mr Quaicoe hinted of plans by the Commission to accredit the media before the general elections and noted this was to facilitate their movement.

However, he disclosed a fee of GHC8.00 would be charged each applicant wanting to secure an accreditation to cover or observe the elections.

He clarified the media were only observers in the conduct of elections in the country,  adding they could not proffer opinions or suggestions to any electoral officer during elections.

According to him, only accredited monitors from the Electoral Commission could physically and practically advise presiding or electoral officers during elections at polling centers.

Meanwhile, the Ashanti Regional boss of the Commission has divulged the upcoming limited registration exercise for first timers would be used to carry out a form of validation of the registered voters in the region.

Mr Quaicoe also advised political parties to take advantage of the upcoming registration exercise to pick challenge forms to obstruct the eventual registration of any applicant they may deem to be unfit.

But, he warned such challenge could only be done in an appropriate manner by the filling of a form to be provided by the electoral officer without any unnecessary physical or verbal confrontations with the would-be registrant. 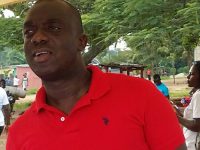