The Chief of Staff, Mr Julius Debrah has admonished the youth to shun politicians who would want to use them for political violence before, during and after the December 7 polls.

He urged the youth to bear in mind that as the next generation of leaders of this country, they should preserve themselves to be able to lead this country and not to cut their lives short or injured simply because someone is seeking a political position.

Mr Debrah who was interacting with some media practitioners in Kumasi noted that President Mahama has invested heavily in sectors all geared towards ensuring that the youth of this country had a brighter future.

He stated that the vision of President Mahama was for almost every Ghanaian youth to realize his or her God given potential with majority of them being in position to compete with their counterparts in any part of the world.

He stated that President Mahama was not desperate for power and was working to ensure that Ghana remained the oasis of peace and the poster boy of democracy for Africa.

Mr Debrah who was the Minister of Local Government and Rural Development and initiated the National Sanitation Day, described as unprecedented the infrastructural development embarked on by President Mahama targeted at opening the country up for employment opportunities.

These developments, he stressed, would create the needed avenues and atmosphere for the creation of industries.
”The government is concerned about youth unemployment and has been working feverishly to ensure that more employment avenues are created for the youth who continue to step out of universities and other educational  institutions”, the Chief of Staff stated.

INITIATIVES:
Programmes such as the Youth Enterprise Skills Development and Youth in Agriculture, Mr Debrah maintained are some of the initiatives government was committed to expanding to rope in many youth who are unemployed.

The Chief of Staff indicated the preparedness of government to link colleges and institutions of learning to the state agencies so that products who complete their courses could have access in working at departments and agencies.

He also revealed the expansion of more tertiary colleges and Senior High Schools, including the 132 community day secondary schools to absorb the increasing numbers that complete secondary and Junior High Schools.

ELECTIONS:
Mr Debrah disclosed government’s resolve to resource all state institutions to play their roles effectively as stakeholders in the upcoming elections.

”We as a government believe that development thrives in a peaceful atmosphere and so we have resourced all state agencies and security services to play their part in ensuring a peaceful country before, during and thereafter December polls”, the Chief of Stated posited.

The security services, he noted had been retooled to respond to the challenges that they may be faced with on voting day as well as days leading up to the polls.

Mr Debrah expressed confidence in the National Democratic Congress (NDC) retaining power due to the massive infrastructural  and educational advancements, adding the President should be given another term to finish what he started. 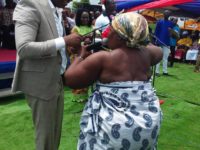