The Bono East Regional House of Chiefs are unhappy with the numerous long standing disputes which have rendered 12 out of their total 19 Paramountcies inactive over the years and as a result affecting development in their various traditional areas.

According to Pimampim Yaw Kabresse 5th Paramount Chief of Yeji Traditional Council who doubles as President of Bono East Regional House of Chiefs, only 7 Paramount Chiefs are currently active as the remaining 12 are all in disputes. He however says Nananom in consultation with their legal team are working tirelessly around the clock to resolve all outstanding conflicts in order to have a full House.

Pimampim made this disclosure in an interview with the Media when the Bono East Regional House of Chiefs had their end of year meeting in the capital Techiman and also historically gazzetted/sworn-in the Omanhene of Tuobodom as an official member.

For his part, Nana Agyei Kɔkɔɔ Takyi Firi Bɛyɛɛman I, newly gazzetted Paramount Chief of Tuobodom could not hide his joy that a pending dispute since 1925 has finally been resolved.

He said the days Tuobodom was known for conflicts are over as he is going to work tirelessly together with the Queen Mother Nana Akua Amoaah II to bring the desired development to the traditional area. 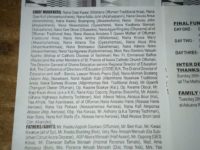