Gyan recently returned from a groin injury, that had kept him out of action for months but his return has been received as a welcome boost for the nation in their quest to win the trophy for the first time since 1982.

The former Sunderland striker is the first of the 23-man squad named by coach Avram Grant to have arrived besides the players who ply their trade in the Ghana premier league. 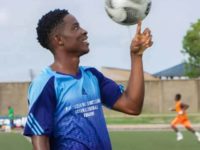