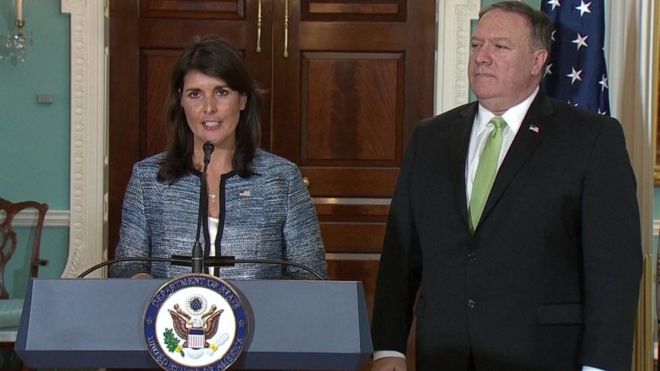 The US has pulled out of the United Nations Human Rights Council.

The body is “hypocritical and self-serving” and “makes a mockery of human rights”, said Nikki Haley, the US envoy to the UN.

Ms Haley last year accused the council of “chronic anti-Israel bias” and said the US was reviewing its membership.

Formed in 2006, the council has been criticised for allowing countries with questionable human rights records to be members.

UN officials are yet to comment on the US announcement. The New York-based group Human Rights Watch condemned the move, and called President Trump’s human rights policy “one-dimensional”.

The move comes amid intense criticism over the Trump administration’s policy of separating child migrants from their parents at the US-Mexico border.

This is just the latest rejection of multilateralism by the Trump administration, and will likely unsettle those who look to the United States to protect and promote human rights around the world.

The United States has always had a conflicting relationship with the UN Human Rights Council. The Bush Administration decided to boycott the council when it was created in 2006 for many of the same reasons cited by the Trump administration.

The then UN ambassador was John Bolton – who is currently President Trump’s national security adviser and a strong critic of the UN.

It wasn’t until years later, in 2009, that the United States re-joined under the Obama administration.

Many allies have tried to convince the United States to remain in the council. Even many who agree with Washington’s long standing criticisms of the body believe the United States should actively work to reform it from within, rather than disengaging.

Ms Haley announced the US’s intention to quit the council at a joint news conference with Secretary of State Mike Pompeo.

She called the council a “cesspool of political bias”, but stressed: “I want to make it crystal clear that this step is not a retreat from our human rights commitments.”

Last year, she told the council it was “hard to accept” that resolutions had been passed against Israel yet none had been considered for Venezuela, which at the time saw dozens of protesters killed during political turmoil.

Israel is the only country that is subject to a permanent standing agenda item, meaning its treatment of the Palestinians is regularly scrutinised. 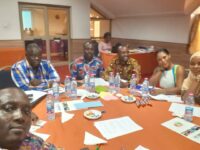 Obama changing US approach on Africa to investment