The second and third-year students at the school used the occasion to drum home their grievances since the allowance due them from government has not been paid.

The Principal of the school, Daniel Attah-Tuffuor and Joseph Yammin, the Deputy Ashanti Regional Minister, both had their speeches interrupted when they mentioned the students’ allowance.

Mr Attah-Tuffuor urged the government to fulfil its promise by expediting action in paying the allowance of the second and third-year students, adding that the first-year students would not benefit from the allowance.

He sternly cautioned parents and guardians to refrain from paying bribes to intermediaries in search of admission for their children, urging students to follow the approved admission procedure.

Mr Attah-Tuffuor also admonished parents to attach utmost importance to monitoring the progress of their wards, while charging the students to be disciplined and learn hard to help them pass their final examination.

He appealed to government to assist the school in its infrastructural expansion works.

The Deputy Ashanti Regional Minister charged nursing trainees to accept postings to the hinterlands after their studies, pointing out to them that those in the rural areas “are also Ghanaians who merit proper healthcare.”

Mr Yammin admonished the nursing trainees to take their education seriously so that the huge investments being made in them by their parents and guardians would not be in vain. 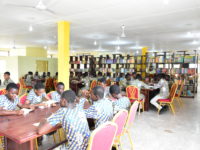