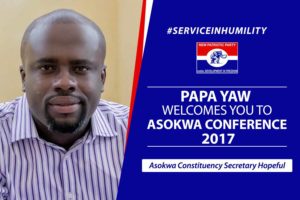 Papa Yaw Asare-Bediako, an aspiring New Patriotic Party (NPP) constituency secretary for Asokwa has implored members of the party to offer both moral and spiritual support for the President, Nana Akufo-Addo as he delivers on his mandate.

According to him, it is the fervent support that party members give the president that will strengthen his resolve to work to fulfill each of the promises he made to the electorate.

Speaking to this reporter over the weekend, Papa Yaw, as the aspiring secretary is fondly referred to by party members noted the commitment of the president to see the populace do well in their respective businesses.

He stressed the policy interventions the president has so far laid down has the potential of turning things around in the economy of the country.

SPECIFICS:
Giving specifics, the aspirant mentioned that the Free Education Policy which is about to be implemented in September this year has the potential of helping almost every Ghanaian child to attend Senior High School free of charge.

This he stressed will take the burden off parents who hitherto had to pay bribes and an unexplained fees for their wards to be admitted in Senior High Schools in the country.

The one district one factory policy, Papa Yaw also noted has the potential of opening up the country to ensure the mineral or agric resource potentials are utilized for the benefit of the people.

According to him, rural folks would not need to trek from their respective villages to the main cities of the country in search of jobs since every community or district would have a potential factory to employ its inhabitants.

ADVICE:
Papa Yaw pleaded with party members to rather than expressing their impatience in public to pray for the president to succeed in the implementation of these policies.

This, he stressed was needful since the art of governance is a gradual and painstaking process which takes time.

He urged NPP members not to relent in their support for the party since the government is determined to implement all its manifesto pledges.

He urged the youth to be hopeful since the government has so far shown that it has their interest at heart and were committed to creating avenues of employment for them. 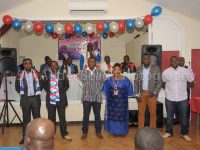