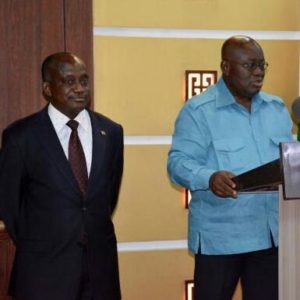 The Ashanti Regional Minister, Simon Osei-Mensah has rallied members of the New Patriotic Party (NPP) to support him as he implements the president’s vision for the region.

According to him, the desire of the President is to see a confident people who go about their individual duties without fear or intimidation.

This desire, he stressed will be underpinned by the creation of the needed economic and social infrastructure by government, adding this is to ensure the citizenry play their part in the development of the region.

Addressing party executives and officers at the party’s headquarters in Kumasi during a familiarization visit, Mr Osei-Mensah underscored his commitment to staying true to the vision of the President.

SUPPORT:
Asking for the support of the party, the regional minister assured the party of his open door policy and reminded them to channel any suggestion or grievance they may have about his administration or government business to his office.

According to him, it was best to carry the people along when you are in leadership position since that is the best way to make the people feel part of governance.

‘’I am determined to carry your concerns, suggestions and criticisms along as I start official government business and am sure with that we can strike the correct check and balances for an effective administration’’, the Minister posited.

He called for prayers and advice from the party so as to make his administration the best ever and also to ensure he delivers on the mandate given to him by the president.

UNITY:
With the cosmopolitan nature of the Ashanti Region, the regional minister called for the support from the citizenry, noting his determination to be a father for all residents.

According to him, ‘no one can govern or administer his office better when he discriminates and antagonizes other members of the society who may not belong to his political party, clan or religious group’.

‘’Once you are chosen as a leader you become so for all the people under you and therefore I stand here to be a minister for all in this region’’, Mr Mensah stressed.

The minister assured members of the opposition parties in the region to feel part of government and urged them to contribute their quota to ensuring Ashanti becomes better developed.

RESPONSE:
On his part, the Ashanti Regional Chairman of the NPP, Bernard Antwi-Boasiako (WONTUMI) assured the minister of the party’s support.

He, however, reminded the minister of the unique position he is now and urged him to use his office to bring development to the region.

Mr Boasiako also charged the minister to ensure he administers his office with sincerity and discipline so as to get the people to support the work he intends to do.

‘’You were elected to serve the people and I believe that will guide you since you will surely account them what you did as regional minister one day’’, the chairman stressed.