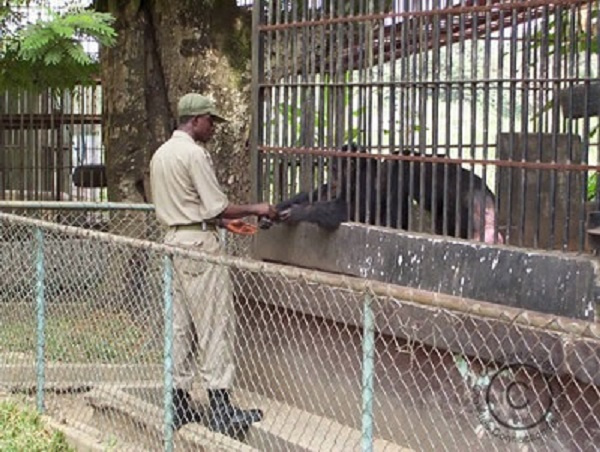 Zoo Keeper interacting with some of the animals

It is interesting to know that, the Kumasi Zoological Gardens (KZG) which used to record over 90, 000 visitors annually, with high revenue generation, has bounced back.

As one of the major tourist facilities in the Ashanti Region, patronage of the KZG has gone down drastically for the last four years due to the closure of the Kejetia roads to make way for the construction of the market.

Although 80 per cent of patrons are Ghanaians, interestingly, the 80 per cent patrons are mostly school children, who Dr Ziekar noted, was a good sign because he believed the young ones would be the ones to lead in the preservation and conservation of the wildlife, making sure the wildlife is protected.

Although the zoo prides itself as the premier national zoo, it currently faces flooding whenever it rains, a situation which poses threat to the numerous animal species that need urgent attention.

The Resident Veterinary and Manager of the KZG, Dr Meyir Ziekar says, they are currently breeding a specific kind of monkey which was found in the western part of the country, but at a point was becoming extinct because of the timber logging, hunting and other human activities.

The KZG currently has a total of 162 individual animals and 46 different species made up of cats, reptiles, ungulates, primates, rodents, birds, including the noticeable hundreds of bats that are not originally part of the zoo but are being protected by the facility.

He observed that, bringing varieties of exotic species would help increase patronage of the facility in the region.

In spite of the numerous animals and species the zoo possesses, Dr Ziekar hints the zoo intends to bring in exotic species of animals to improve on the variety of animals the zoo presents.

He said the fight to protect wildlife has not been easy for the Wildlife Division of the Forestry Commission, considering the rise in patronage of bush meat in the country.

He said it is fascinating to know that, the KZG is currently serving as a breeding centre for endangered wildlife species with the intention of releasing them back to the forest.

It also presents itself as an avenue for scientific research, serving as a field laboratory for scientists to study the behaviour of animals, their interactions with humans, disease transmissions from wild animals to animals and from animals to humans (zoonotic diseases such as ebola, tuberculosis, rabies among others).

Apart from preserving wild animals associated with our cultural heritage, the KZG currently plays the role of conservation education, which is basically educating the public and creating awareness on the preservation and conservation of wildlife resources for future generations as a result, having healthy and balanced ecosystem.

Located in the centre of the Kumasi city, the zoo, which occupies 11,000 hectares equivalent to 26 acres, was initially managed by the Kumasi Municipal Council and transferred to the Forestry Service in October 1963, then handed over to the Game and Wildlife Department and currently under the management and supervision of the Wildlife Division of the Forestry Commission.

The Kumasi Zoological Gardens (KZG) was established alongside the Cultural Centre in July 1957 as a result of the need to preserve our culture and the most cherished wildlife heritage.

The commission places a ban on hunting from August 1 to December 1, every year but the hunters defy the ban and carry on with their hunting escapades between the period.

Controlling bush meat business in Ashanti Region and for that matter the country, has always been difficult for the Division because the business has become the livelihood for both the traders and hunters who are mostly unlicensed and until they find alternative means of livelihood, all the Division could do is to intensify wildlife protection education rather than restrict implementation of the law.

In spite of the Convention on International Trade in Endangered Species (CITES) that protects the trade in Pangolins and other animal species, the problem has also been enforcement of the law by the Division to confiscate the animals and cause the arrest of the possessors.

One area which needs a critical attention is the handling of bush meat which has the tendency of spreading zoonotic diseases, because the World Health Organisation (WHO) estimates that, in 2018, 61 per cent of all human diseases are of zoonotic origin and 75 per cent of new diseases discovered in the last decade are zoonotic.

In view of this, there is the need to promote the formation of proper organised groups of bush meat dealers to not only educate them on the handling of the meat, but to also get them to gradually accept the importance of protecting and conserving the wildlife and get them to know those animals that are strongly protected by CITES.