Climate experts have predicted a huge negative impact of of climate change on the country’s agriculture and food security. They do not expert a good rainfall pattern this year.

The prediction has necessitated a shift in Agricultural practices as conventionally practiced in Ghana.

It is against this backdrop that farmers have been urged to embrace tilling as the new method of farming. Tillage as a method of farming has not been commonly used by farmers; however, experts believe it is the way to go.

Tillage practices
Tillage has been used for millennia to prepare the soil prior to sowing many of the annual grain crops. It involves applying power to break up and rearrange the entire topsoil structure.

It destroy weeds and pests and is also important for incorporating, redistributing or releasing nutrients and making the soil texture suitable for seed sowing, seed germination and for easy penetration of seedling roots.

The Director of Center For No – Till Agriculture, at Amanchia in the Atwima Nwabiagya district of the Ashanti region, Dr. Kofi Boah, has called on farmers to adopt tillage practices during the main crop season to salvage the country from the scare of food insecurity.

He said tillage practices are important in areas where water is a major limitation to production and where soil structure is poor and erosion is also a problem.

“These practices when implemented and followed by the farmers will have long term protection of the soil resources in its natural and rich state, reduce the cost of repairing machinery and labour in clearing of the weeds from the farms before planting or sowing of seeds.”

Dr. Kofi Boah made these remarks during a visit by some members of Ghana Agricultural & Rural Development Journalists Association (Gardja) to the Center.

The trip afforded journalists the opportunity to be schooled on how the tillage system of farming has helped to boost food efficiency and production for indigenous farmers in the catchment areas of the Center.

A visit to a 20 acre plantain farm tells how the system seeks to change food production in the coming years despite the looming drought.

He advised farmers to end the trashing and burning of weeds before sowing else they stand losing more during the post-harvest period.

“The climate change pattern is not conducive for farming and to sustain and have enough moisture in the soil proka, in Akan language, is the best farming method to resist the drought in 2016,” he stated. 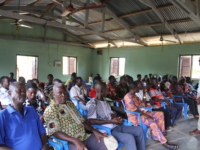 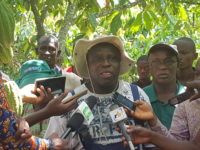