Bosomtwe DCE accused of working against the NDC Some members of the NDC in the Bosomtwe Constituency say the leadership style of the District Chief Executive of the area will cost the President the next elections if nothing is done about it.

They suspect her of clandestinely doing the bidding of former first lady Nana Konadu Agyeman Rawlings and her NDP.

They accuse the DCE, who is also the NDC’s Parliamentary candidate for the area of being the cause of some sharp divisions within the party  especially among old and new party executives.

Adams Rauf, a branch secretary and a leader of ‘’NDC Youth in Bosomtwe” tells rawgist.com, “the vindictiveness of Madam Veronica Antwi Adjei will cause the party to lose votes since members are not impressed with her leadership style in the constituency.

He explains that “anyone who seems to have different opinion from hers is her enemy. She has caused the transfer of some administrators in the Assembly. The Co-coordinating Director and the Planning Officer are currently on transfer…and we believe a lot will follow” and adds that the former DCE I.K Nyame has attempted to help resolve the issue without success.

“We don’t even understand why the President appointed her as DCE… We know her very well and what she is doing to support NDP clandestinely”.

Meanwhile, the party in the region has vowed to help make the one million votes agenda of the party a reality. They however believe the DCE’s behaviour is inimical to the chances of the party come November 7. 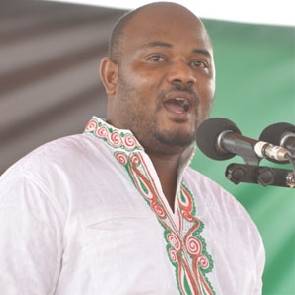 Three to battle for soul of Ashanti NDC