You cannot borrow yourself out of bankruptcy – Bawumia tells gov’t The 2012 Vice Presidential candidate of the New Patriotic Party (NPP), Dr Mahamudu Bawumia, has alleged that the Bank of Ghana, under governing National Democratic Congress, has spent $6.5 billion from 2009 to date, but has failed to stabilise the value of the Ghana cedi.

In a press statement made available by the communications team of Nana Akufo-Addo, Dr Bawumia is reported to have said that in eight years of the administration of President John Agyekum Kufuor, the Bank of Ghana spent some $2.5 billion in non-oil foreign exchange sales to stabilise the cedi.

The statement said at the time the NPP left office in January 7, 2009, the cedi traded at GH¢1.2 to $1, but despite the $6.5 billion spent by the Bank of Ghana to intervene on the foreign exchange market, the Ghana cedi, is currently trading at almost GH¢4 to $1.

Dr Bawumia was addressing delegates from the Upper West Region Friday during the tour of the region by Akufo-Addo.

The former Bank of Ghana Deputy Governor is said to have noted that the fundamentals underlying the Ghanaian economy are out of gear, adding that by the end of 2014 the cedi would have depreciated by more in one year than in the entire period of the last NPP government.

Dr Bawumia also claimed that Ghana’s net international foreign exchange reserves, currently stands at some $700 million, and can now only account for less than one week of import cover.

He is said to have described the situation as very precarious saying ”the bills that we owe as a nation is currently more than what we have in our reserves, and yet still the government says we are not in a crisis?”

According to the statement, he stressed that Ghana will soon have no option than to opt for a bailout from the International Monetary Fund to get the economy back on track.

Dr Bawumia went on to add that the admission made by Finance Minister, Mr. Seth Terkper, on July 17 that “paying statutory funds will cripple the economy” means the economy is already crippled and on the verge of bankruptcy.

He said: “When schemes like GYEEDA, SUBAH, SADA crop up, the NDC will always find money for it. However, when statutory payments to the NHIS, District Assemblies Common Fund, GETFund are to be made, the government will say there is no money.

Dr. Bawumia said Ghanaians and the international community had lost confidence in the Ghanaian economy, adding the government of Ghana had to work hard to restore confidence.

He said: “You cannot manufacture confidence. Confidence has to be based on prudent, sound and credible policies. You cannot just wake up and try to convince people to have confidence in an economy.

“Unfortunately there is no basis for this contrived confidence. If you are going to solve a problem, the first thing to do is to admit the problem. The NDC have refused to acknowledge that the economy is in crisis, how can the problem be solved if expectations are not properly aligned?”

Touching on the decision of the government to go for a 3rd Eurobond issue, which is expected to raise $1.5 billion to be used to fund government’s capital expenditure in the 2014 Budget as well us shore up depleted foreign exchange reserves, Dr. Bawumia’s said that would not be sufficient to solve the economic problems facing the country.

“You cannot borrow yourself out of bankruptcy,” he said. With Ghana’s debt levels at almost 60% of GDP and interest payments in 2014 amounting to more than four times Ghana’s oil revenue for the year, it is not clear how adding to the debt burden is going to get us out of the current crisis.

“While the Eurobond borrowing would provide additional borrowed foreign exchange to support the cedi, the impact is bound to be temporary if the fundamentals are not addressed. Note that the Bank of Ghana has already spent some $6.5 billion of foreign exchange reserves in the last six years to no avail. So what difference will an additional $1.5 make if the underlying policies are wrong?” 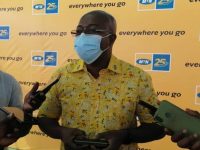