Former Western Regional minister,Joseph Boahen Aidoo says Former Deputy Ashanti regional minister; Joseph Yammin made a big mistake when he said that the NPP won elections in 2004 because they were in government.

Yammin noted that during the second round in the 2004 elections the NDC had no polling agents to sign the pink sheets in the various polling stations but the NPP accepted the results.

In a rebuttal to his statement, the former western regional minister stated that ‘‘in the 2000 general elections the NPP was not in government but won the elections’’.

According to him,the electoral commission is to be blamed since they didn’t use the biometric register in the right perspective .

‘‘In Nigeria the machines were handled by professors and the highly educated with the minimum qualification being a PhD holder and this has brought the current change in Nigeria’’he noted.

On ways to resolve the disputes in the NPP,he suggested that party elders and the executive committee(NEC) meet and discuss the way forward for the party with Akuffo Addo being part of the meeting.

Hon. Joseph Boahen Aidoo advised the youth in the party to desist from unhealthy comments on social media especially on whatsapp. 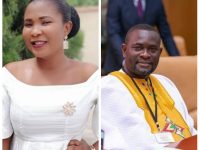