Stephen Amoah, popularly known as Sticker, has admitted saying that he was told by an NDC bigwig the accident that claimed over 70 lives on the Techiman-Kintampo road was the making of the NDC and that the NDC is in talks with their “spiritual masters” to ensure the spillage of more blood.

Joseph Yammin who spoke on the issue on Kumasi-based Metro FM said he did not expect such “childish” statement from Stephen Amoah especially as Ghana heads for the polls in November. “It’s high time we nipped this kind of thing in the bud”, he said, adding that Stephen Amoah’s statement is a call on the security agencies to be alert.

“Let no one say in the case he is invited, that he is being politically witch hunted”.

Stephen Amoah has already made those statements on Otec, Hello and Metro FM. “People have lost their lives painfully and all sticker could do is do politics with it. Why didn’t he use Mahama Adam’s acid situation, JB Dankwa’s death, the Asawase victim among several others instead of the accident that has got several families mournin? Mr. Yammin insists the NPP man comes out to name which NDC official told him that.

For his part, sticker insisted he cannot reveal who told him and no one can force him to. He said NDC makes wilder allegations than this. “Whoever is not happy can come and kill me i don’t care but what I said is true”, he insisted, adding “When they said Nana Addo has killed the wife, who arrested anyone?”

Yammin said some jokes are dangerous and urged caution especially as Ghana approaches the elections. 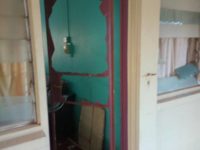