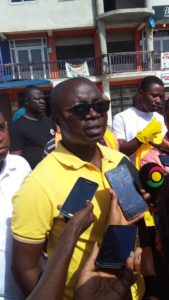 The Metropolitan Chief Executive (MCE) for the Kumasi Metropolitan Assembly, Mr Osei Assibey Antwi has underscored the assembly’s commitment to ensuring they build a cleaner Kumasi than what pertains now.

The Kumasi Metropolis, the Mayor noted deserved every effort from the assembly to ensure its environs are clean and decent for human habitation.

Addressing the media last Saturday at Abrepo Junction during a clean-up exercise to herald the arrival to the city Prince Charles, the Prince of Wales the Mayor stated the determination of the KMA to make the central business district as well as other areas in the metropolis clean.

He noted the periodic clean-up exercise the KMA organizes for residents is a step to imbibe cleanliness into the social fabric.

‘’We are here cleaning to welcome Prince Charles and the wife but our main aim is to imbibe the trait of cleanliness and to also show that we are responsible for our environment’’, Mr Osei Assibey posited’’.

The Mayor mentioned plans by the assembly to intensify the operation keep the city clean and green which it launched last year.

He noted the exercise has been smooth so far but hinted of plans to do more in all the communities in the metropolis.

Trees apart from its aesthetic importance, the Mayor noted provides shade for people.

The planting of trees, Mr Assibey insisted should become part of the citizenry so that together they can keep the environment conducive for human habitation.

‘’Apart from keeping the city clean we at the assembly together with our stakeholders are determined to  make Kumasi look green with the intensive planting of trees in all our communities Kumasi’’, the MCE stated.

VISIT OF THE PRINCE:

Dwelling on the visit of the Prince of Wales, Mr Assibey says the choice of Kumasi alone by the Prince has good dividends for the people.

The Prince, he stated has opened the door to other high ranking officials from other countries to come to Kumasi to explore trade and commerce potentials.

He also mentioned the tourism potentials the visit would have for the city, adding many British or European nationals would want to visit the metropolis to gauge what makes it unique.

‘’It is important that we take advantage of the visit of the Prince to Kumasi and the Manhyia Palace since it is an endorsement of our city, culture, tourism and trade potentials’’, the Mayor stressed.