Professor Clement Dzidonu, the President of the Accra Institute of Technology (AIT) has suggested the institution of stakeholder engagement and active partnership between the universities and industry/commerce to brainstorm on graduate job creation in the country.

He has also called for the setting of national quotas for graduate turnout in key fields and professions, saying that the nation cannot continue to produce the calibre of graduates the economy does not need, while at the same time failing to produce enough of those that are required for the growth of the economy.

Professor Dzidonu made these suggestions when he delivered a speech during the Sixth Graduation Ceremony of AIT in Accra on Saturday, in which he dwelt on Ghana’s graduate unemployment problem and possible solutions to address the situation.

He said such university-industry partnerships could bring to the table for national dialogue, an action programme that could lead to specific industries recommending and sponsoring a particular tailor-made degree/HND programme to produce graduates that specifically meet their needs.

“Listening to industry stakeholders can provide an indication on academic programmes that need to be scraped or revised or completely overhauled so as to remain relevant to avoid producing unemployable graduates”, he said, emphasising that .the solution to Ghana’s graduate unemployment problem called for bold steps to scrap some of the outmoded, technologically-timid programmes and the introduction of modern industry-relevant programmes suited for the competitive job-market.

According to the AIT President, a number of studies conducted world-wide to seek views of employers showed that they expected some specific skill sets and competencies from graduates seeking jobs in their organizations.

“These studies show that getting a degree is not enough, prospective graduate job seekers must have in addition key employability skills, attitudes and orientations. It is therefore important that universities including those in Ghana take on the responsibility to go the extra mile to produce industry-compliant job seekers with these employability skills and competencies”, he stated.

In this regard, he said, AIT had introduced last semester a special course in Career Development and Employability Studies (CDES) to be taken by all level 200 students to provide them with the requisite job creation and employability skills that had been identified by employers worldwide as crucial for the modern technologically-driven economy.

“Taking a lead on active engagement with industry, AIT has also entered into partnership with the Ghana News Agency to offer a number of Journalism and Technology programmes as a response to the industry request. We are also working with the Ghana Institution of Engineers to run a number of continuing professional education and training programs targeted at practicing engineers.”

Professor Dzidonu cited the example of the alumni of Massachusetts Institute of Technology (MIT) in the United States, who were reported to have set up about 25,800 companies worldwide and generating global revenues of about $1.9 trillion a year.

He indicated that AIT was taking a cue from institutions like MIT to set up in Ghana the first ever Graduate Entrepreneur Institute that will recruit, train, mentor and incubate graduates of any discipline from any of the nation’s universities who want to set up their own business companies and create jobs and wealth.

“The mandate of the universities must embrace producing job creators, not just job-seekers,” he said, urging both public and private universities to put in place initiatives that could transform them into leading entrepreneurial universities rather than just teaching and research institutions.

The graduation ceremony had Former President John Agyekum Kufuor as Special Guest of Honour. It also attracted other high profile personalities including Professor Francis Allotey, Chairman of AIT Board of Trustees, Professor Anuwar Ali, Vice Chancellor, Open University of Malaysia and Members of the AIT Board of Trustees.

With a wide range of Master’s degree programs, and given the fact that over 250 PhD students are now enrolled at AIT, the Institute has positioned itself as one of the leading postgraduate research institutions on the African Continent. 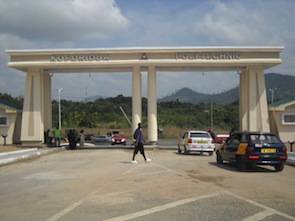