Two private cars crashed into each other in front of Independence Hall of the Kwame Nkrumah University of Science and Technology.

The two cars with registration numbers AS 7389 15 and GT 1170 Y were heading towards the Republic Hall.

The sound of the collision drew several students to the scene.

One of the drivers, a lady, whose name was not immediately given at the time, appeared confused and disturbed about the incident. She was spotted making calls to unknown people to obviously report the unexpected incident.

Only one female security stationed at the Independence Hall was at the scene.

Though the real cause of the accident is unknown, the two men who occupied one of the cars blamed the lady for the incident.

No casualties were recorded. 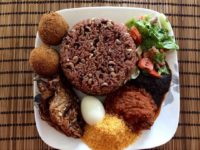