Senior High Schools To Close Down If…. Senior High Schools nationwide are likely to close down if government does not release grants in time.

School authorities say they cannot cater for their feeding expenses any longer because the undue delay by government to pay grants and subventions to schools and education offices which have been in arrears for quite sometime now, is having a telling effect on their operations.

The GHC 29.50p per student subvention from the Ghana Education Trust Fund (GETFund) has delayed due to government’s inability to release funds, according to the Conference of Heads of Assisted Secondary Schools (CHASS).

Speaking in an interview to Kwami Sefa Kayi on ‘Kokrokoo’, spokesperson for CHASS and Headmaster of Tepa Senior High School, Mr Peter Anaafi Mensah lamented the mounting bills and debts as a result of the non-payment of the subventions.

According to him, if government continue to delay in disbursing the money, it is likely that the Electricity Company of Ghana (ECG) and other utility providers would cut their supply. They would also have to keep borrowing to enable the students write examination.

“This is what the school uses in running its administrative works… Government has promised to release funds and so we are waiting for them. We hope it will be soon; otherwise running affairs in the various schools will be difficult,” he indicated. 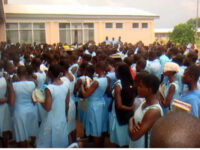