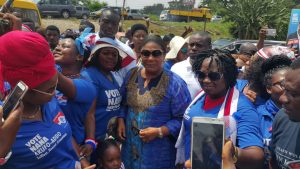 The wife of the New Patriotic Party’s(NPP) flag-bearer, Mrs Rebecca Akuffo-Addo says the NPP had what it takes to liberate Ghanaians from the current sufferings handed down to them by the ruling National Democratic Congress (NDC).

According to her, the party has carefully tailored policies that would ensure the creation of jobs and industry to absorb the huge number of unemployed youth in the country.

Addressing congregants at the Ebenezer Worship Center, a Charismatic Church at Ahenema Kokoben where she kick started her four day tour of the Ashanti Region, Mrs Akuffo-Addo indicated the readiness of the party to take power and restore the country onto a glorious path.

She, therefore, appealed for support and urged congregants to spread the message of hope everywhere they found themselves so as to enable the populace vote massively for change in the upcoming general election.

CHANGE:
Drawing deafening applause from the congregation, Mrs Akuffo-Addo called for change, insisting the current way of things in the country was disheartening.

According to her, youth unemployment was getting huge by the day, poverty was getting endemic in both the city and villages.

”As I travel across the length and breadth of the country I see poverty in our cities and villages with many struggling to get food to eat”, Mrs Akuffo-Addo noted.

However, she stressed, ‘but in all these difficulties and poverty I still see hope and better days ahead of us if only Ghanaians will repose their trust in my husband and the NPP to carry out the transformational agenda they have famously promised the people of this country’.

RESPONSE:
Responding to the appeal to the church for prayers, Rev Ebenezer Adarkwah Yiadom promised to stand in the gap for the NPP, the flag-bearer and his household.

According to him, all manner of missiles are released spiritually against leaders of political parties during these peak periods of electioneering campaign.

However, he assured Mrs Rebecca that nothing bad will befall the NPP and its followers but pleaded that the NPP fulfills its promises when they are given the mandate to govern when they win the upcoming polls.

Rev Adarkwah expressed delight at the respect the New Patriotic Party accords to the Almighty God as the party had visited his sanctuary twice this year with the first being the one undertaken by Chairman Bernard Antwi- Boasiako also known as Wontumi. 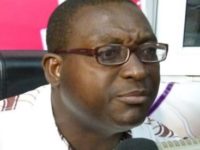