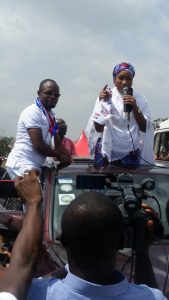 Samira Bawumia, wife of the Vice-Presidential candidate of the New Patriotic Party (NPP) last weekend stormed the Ashanti Region as she began a four day tour to the ancient Kingdom.

The tour which started last Friday began with a visit by the lady to the Kumasi Central Mosque where she paid homage to the Chief Imam and Scholars as she also worshiped with her colleagues during the Friday prayer session.
Wearing a neatly crafted hijab, Mrs Bawumia met identifiable youth groups as well as the women’s wing of the party across the constituencies in the Region.

Accompanied by top party gurus in the Region including the Deputy Women’s Organizer, Joana Mawusi, and Kwesi Kyei, the Regional Communications Director, Mrs Bawumia urged the youth in the Manhyia -North, Odotobri and Suame constituencies to work to ensure a positive change is realized in the upcoming general election.

MESSAGE:
Speaking at separate meetings with youth groups at Alabar and Moshie-Zongo, Mrs Bawumia said the time was up for them to take their destinies into their own hands by charting a good path.

That path, she observed could only be the one that would spell a better future for them and their unborn children, insisting the future looked bleak with the National Democratic Congress (NDC) in power.

‘’As youth of this country the time has come for us to choose a path that will build us up for a better life for the future and that future that we look for is what the NPP is envisaging for us in its manifesto and policy statements’’, Mrs Bawumia posited.

She added, ‘the jobs that we seek for as well as the better life we look forward to is what the NPP and Nana Akuffo-Addo is promising’.

CHANGE:
The time, Mrs Bawumia insisted was ripe for the country to rise up and embrace the kind of change the NPP was promising.

According to her, the current trend of things being done in the country by government including the award of contracts and its execution was laced with massive corruption, noting the populace risk being infected with such a virus if a conscious effort is not made to change the NDC in the upcoming polls.

‘’Every single day we as a people are visited with one corrupt act or another and it seems the system is getting used to such low levels of governance’’, Mrs Bawumia decried.

But, sounding confident Mrs Bawumia indicated the next NPP government would ensure acts of corruption were punished and made unattractive to the Ghanaian youth who she insisted possessed the potential to become great’.