PNC 2012 Flagbearer told to refine himself through proper education The National Treasurer for the Peoples National Convention, David Apasera has attributed the party’s abysmal performance in the last elections to the fielding of a bad presidential candidate.

The PNC in the 2012 presidential polls got less than 1% of the total valid votes cast. The presidential candidate Hassan Ayariga secured 24,621 representing 0.22 % of votes in the ballot-a performance that was in contrast to what Dr.Edward Mahama put up four years earlier.

During the 2008 elections, then flagbearer Dr Edward Mahama polled 73,494 votes thus 0.87% of valid votes. That same election saw the PNC lose two out of four seats in parliament.

But the 2012 vote was more of a setback for the Nkrumaist party as it dropped some 48,873 votes and could also not retain one of its two seats.

However in an interview with Napo Ali Fuseini of Live FM, the National Treasurer blamed the party’s misfortune on the caliber of candidate it fielded for the Presidential contest.

According to him the candidate who was also the leader of the party failed to execute an effective campaign in addition to failing to support the various parliamentary candidates who contested on the PNC’s ticket.

“What was happening was just like a comedy and nobody votes for anybody who is not serious, if you are turning yourself into a comedian who will do that …then we better go for the best comedian in Ghana like Agya Koo”.He said Agya Koo is more popular but nobody will entrust him with party leadership because (politics) is not his field.

Not only did the National Treasurer accused Mr Ayariga of lacking the quality needed to lead a national party like the PNC, but also suggested the 2012 flagbearer lacked proper formal education and this according to him manifested in the candidate’s conduct during the campaign for the elections.

Mr.Apasera however admitted failure on the part of PNC leadership to do a thorough background check on Mr. Hassan Ayariga before electing him as their candidate at congress. He attributed this failure to the lack of capacity to undertake such an exercise which according to him has been the bane of the party.

Ruling out the possibility of Mr.Ayariga leading the PNC for the 2016 Mr.Apasera revealed a search has already begun for a better candidate for the 2016 elections.
He suggested it would be in Mr.Ayariga’s interest to “refine himself” before seeking another bid to be the flagbearer in a distant future.
When asked what he meant by refine himself, the National Treasurer explained “he (Ayariga) may have to go through schooling. He may have to get himself properly educated; that is better”.

Again when it was suggested to him that the 2012 flagbearer may have schooled outside the country, Mr.Apasera doubted Mr.Ayariga’s credentials and said “when you are properly educated it reflects, it is not for anybody to say as to whether you have gone through the university or not” and added “if you go through university education and you go through it well, it reflects so if you are coming forth and it’s not reflecting may be you have to go back and do more” 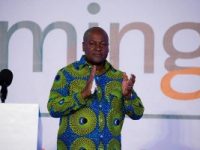