An investigative committee set up by the Cocoa Research Institute of Ghana (CRIG) has said it cannot unravel the circumstances surrounding how some key documents, which are of material relevance to the case involving former Ghana Cocoa Board (COCOBOD) CEO, Dr Stephen Kwabena Opuni, and businessman Seidu Agongo, went missing at the institute, reports Class91.3FM’s court correspondent Joshua Quodjo-Mensah.

It is recalled that the Deputy Director, in charge of legal affairs at COCOBOD, Mr Johannes Velba, on 11 December 2019, told the court that CRIG had set up a committee to probe how some documents went missing from its files.

Mr Velba also affirmed that upon checks, it had been discovered that some files had possibly been either tampered with, re-numbered or erased, hence the reason for setting up the committee.

The counsel for Mr Agongo, Mr Benson Nutsukpui, on different occasions during the trial, told the court that the missing document, which is a letter dated 21 October 2014 with reference number CRIG 39/14vol.19/6448, would settle the controversy as to whether the fertiliser at the centre of the matter, Lithovit, is powdery or liquid.

Mr Nutsukpui said in that particular letter, CRIG officially referred to the fertiliser as Agricult Lithovit Liquid Fertiliser, contrary to claims by the state’s witnesses that the fertiliser sample tested was in powdery form.

A committee report filed before the court on 1 February 2019 failed to provide the whereabouts of the document as well as how it vanished from CRIG’s records.

Interested parties in the case have been served copies of the report, with presiding judge, Justice C.Y. Hornyenuga refusing an appeal by the Director of Public Prosecutions, Yvonne Atakora Obuobisa, for the trial to continue even though the defence counsel insisted they were not served copies of the committee’s report on time.

Dr Opuni’s lawyer, Mr Sam Cudjoe, told the court that he was served with a copy of the report, minutes before sitting commenced on Wednesday, 6 February 2019 while Mr Nutsukpui, counsel for the 2nd and 3rd accused persons, said he was only served in the afternoon of Tuesday, 5 February.

In his ruling, Justice Hornyenuga maintained that in order for justice to prevail, all the counsel must have ample time to peruse the report before the trial continues.

The case has been adjourned to 12 February 2019 when Mr Nutsukpui is expected to continue his cross-examination of the states 2nd prosecution witness, Dr Alfred Arthur. 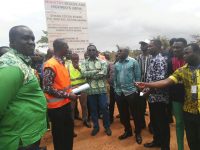