The past week has seen an affront on journalism when Baffour Gyan, elder brother of Ghanaian football team captain Asamoah Gyan took the law into his hands and beat up Graphic Sports reporter Daniel Kenu.

Kenu’s sin was that he asked a question at the Black Stars press conference that the Gyan’s thought was silly and therefore the elder brother organised thugs aka macho men to accost the journalist and beat him in a very humiliating manner. Allegedly the lawyers will say.

Thankfully the elder Gyan and his accomplice were arrested by the police, and though have been bailed since, it is important to note that the GJA and other well-meaning individuals and institutions have condemned the act.

It is very preposterous and deserving of every condemnation that people will take the law in their own hands to determine what type of punishment should be meted out to another person for what in their view is that their victim asked a “silly” question at a press conference.

Granted that he asked a silly question is beating him up the best the to do?

Baffour Gyan cannot continue to parade himself like Tarzan and deal with anyone who says something he doesn’t like about his ‘beloved’ brother.

We live in a civilised and lawful country, and anyone who feels aggrieved about anything cannot just decide to put the law in his hands and mete out punishment.

This is not the first time he has reacted with self-important machismo to what he deems as an affront on his brother, but hopefully this will be the last time.

As for those who claim that the journalist asked a silly question and therefore deserved what he got, all I have to say is that their position is infantile and not in tandem with commonsense.

Every question can be asked, but not every question should be answered in a manner the questioner wants it answered. Plus you don’t beat up people for asking questions.

And, by the way, Baffour, this is not the jungle where you organise hoodlums to deal with people you disagree with.

We Could Have Solved Appearance Fee Issue … GNPC 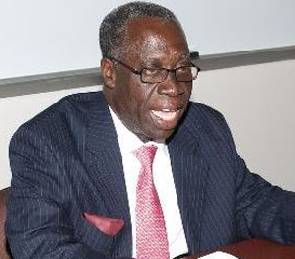 We must be ashamed of our management skills – Osafo Maafo