The Convener for the Ghana Youth Watch (GYW), a non-partisan youth organization, Mr Emmanuel Osei Gyamfi says the New Patriotic Party (NPP) appeals more to the Nation’s youth than any other political party.

According to him, the promise of job creation by the NPP’s flag-bearer seemed to have ignited some passion in the hearts of the youth across the country. Speaking to the Ghanaian Observer Newspaper in Kumasi, the convener noted many of the youth had bought into the promise of jobs and youth empowerment.

Many had embraced the one district one job concept as envisaged by the NPP and noted the NPP flag-bearer had brought some hope in the youth of the country.

REASONS:
According to the youth advocate, most of the youth who attended the group’s forum had complained bitterly about lack of jobs in their localities.

Others, he stressed also expressed similar frustration in the current system owing to their inability to secure jobs after completing school.

Most of them, Mr Gyamfi disclosed accused the National Democratic Congress (NDC) for making their lives miserable by placing an embargo on government sector employment.

Some, according to him, claimed could have been offered job opportunities if government was considerate about their plight.

Many others who were self-employed said the utility tariff and the erratic power supply had either spoiled their businesses or rendered them incapacitated to retain their employees or apprentices, the youth leader spilled.

PREDICTION:
Mr Osei Gyamfi predicted the NPP stand to gain from the votes of the youth in the upcoming presidential election since it had the most convincing policies for youth development.

With the promise of tax reductions and exemptions for local industries, the youth advocate insisted the NPP would win more of the youth to its side.

He noted the youth were itching to have the opportunity to demonstrate their support for such policies by the NPP in the upcoming election.

According to him, there was every indication the youth will determine who becomes the next president of the country.

The youth, he posited, believe the 2016 election was about which party is best placed to shape their lives for the future. 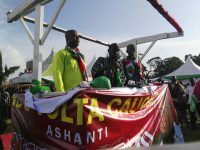