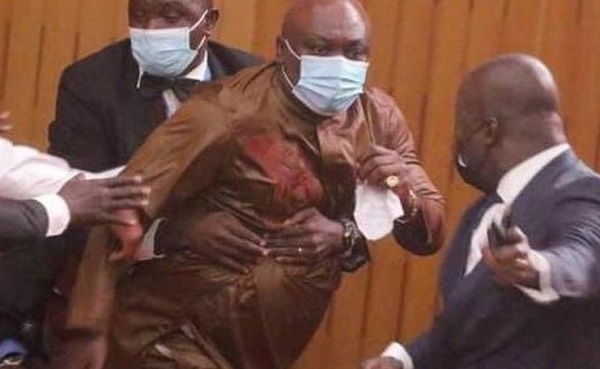 Former Deputy Minister for Youth and Sports; Joseph Yammin remains resolute in his call for Carlos Ahenkorah to face the full rigours of the law for snatching ballot papers during the election of a speaker for Ghana’s Parliament.

Many consider the Tema West MP’s action as very shameful and an embarrassment to Ghana.

Although the MP has rendered some kind of apology, Mr. Yammin says it is not about apologizing but rather, upholding the law.

“This is so sad. I’ll die for my party any day. i did it for the grassroots who relied on us in power to survive, the president who needs some peace to run the country and the greater npp party as a whole because we cannot always allow the ndc to threaten and vilify us. I apologise though to my family and friends both far and near who may be affected by my actions. The Npp in me couldn’t be controlled. I apologise but i tried!!!” Mr. Ahenkorah wrote in the aftermath of the infamous action of snatching ballot papers during the election of the speaker.

“Any time a thief is caught he or she apologies or pleads for mercy but none of those pleas are taking because the laws are there for these specific reason. The ultimate punishment for a crime is applied to whoever commits it and in the case of Carlos it was in the full view of the whole world” Mr. Yammin insisted in an interview with rawgist.com’s Bernard Buachi.

He reminded the Police that “the world is watching and that all eyes are watching to see how this crime will be treated as there are people who have plans of emulating same looking at the punishment that will be accorded the Member of Parliament”.

Mr. Yammin insisted that the action of the MP is frowned upon by the vigilante and related offenses law with punishment prescribed accordingly and wondered how come Carlos Ahenkorah continues to walk free.

Debt Ridden Parliament To Go On Recess By Force