Authorities at the Kwabre East District Assembly (KEDA), in the Ashanti Region have attributed their inability to clear a heap of refuse dump site at a community in the District to financial constraints.

A heap of refuse is gradually attaining a mountainous height at Ahwia-Anyinam-a community under the Kwabre East District.

Houses and churches are situated 10 meters away from the refuse dump site, raising health concerns to the nearby inhabitants.

Smoke has been bellowing from the site due to the regular burning of the refuse there.

The stench emanating from the site has also posses’ health risk not only to the residents but also passers-by.

According to residents in the area, the development was posing health risk to them as they fear contracting strange diseases if city authorities fail to address the situation.

District Chief Executive (DCE) for the area, Adams Iddisah, revealed that the refuse dump site has begun developing for over 70 years and his outfit was still making efforts to get it cleared.

He however attributed their inability over the years to clear the mountainous refuse dump to lack of funds.

The DCE said, “currently we can’t evacuate the refuse dump because of we have financial challenges. The refuse has been there for decades”.

He further said the Assembly has carried out periodic exercises to clear similar refuse dump sites within the district.

Communities within the Kwabre East District are grappling with poor sanitary conditions due to a number of refuse dump sites springing up. 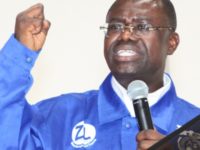